A Festival of Carols by Candlelight to prepare for the Christmas season in the beautiful surroundings of Ealing Abbey. The evening will include a sequence of Christmas readings alongside carols both old and new performed by Ealing Abbey Choir and Orchestra. The music will feature traditional seasonal music and contemporary carols including Harold Darke’s “In the Bleak Midwinter” and Bach’s rousing “Jauchzet Frohlocket”. Ticket price includes programme and a glass of mulled wine and mince pies after the concert.

From the Abbey Bookshop
after all Masses on Sunday 1st, 8th & 15th December

or tickets reservations for payment and collection on the door
Tel: 020 8862 2100 (answerphone) | Email: abbeychoir@ealingabbey.org.uk

The Clarinet Concerto in A is performed by the hugely talented young soloist Valentina Elner-Kupcha.

Tickets can be brought in advance via the St John’s Smith Square Box Office https://www.sjss.org.uk/events/mozart-celebration

A festival of carols by candlelight to prepare for the Christmas season in the beautiful surroundings of Ealing Abbey. The evening will include a sequence of Christmas readings alongside carols both old and new performed by Ealing Abbey Choir and Orchestra. The music will feature traditional seasonal music, such as In the bleak midwinter and Once in Royal David’s City, and carols by Bach, Rutter and Williams. Ticket price includes programme and a glass of mulled wine and mince pies.
You can buy tickets in the Abbey foyer by the bookshop on the first 3 Sundays of December (2nd, 9th & 16th) after the morning masses and after the evening mass on 9th December. You’ll also be able to buy some delicious home made cakes on 9th December. Or you can just buy your tickets online here –
https://www.seetickets.com/event/carols-by-candlelight-ealing-abbey-choir/ealing-abbey-london/1286324
Don’t forget your discount if you’re a registered Friend of the Choir ! 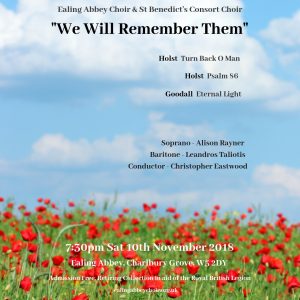 Ealing Abbey Choir & St Benedict’s Consort Choir will be marking 100 years since the end of the First World War with a performance in Ealing Abbey on Saturday 10th November.

Commemorating all those who have lost their lives in conflicts, the concert will include Howard Goodall’s contemporary requiem Eternal Light.

Requiems are traditionally a prayer for the salvation of the departed soul, based on the medieval church’s Mass for the Dead but in Howard Goodall’s contemporary take, Eternal Light reflects on those who are left behind. It provides solace for the living through the healing power of music, and its combination of the traditional Latin text, and moving poetry.

Howard Goodall describes Eternal Light, which was commissioned in 2008, as a requiem for the living, offering sorrow and understanding for those who are grieving. Using English poetry from the past 500 years and hymns alongside the more familiar text of the mass this is Howard Goodall’s most popular choral work. Performed by the choristers and lay clerks of Ealing Abbey Choir and the Consort Choir of St Benedict’s School, it will be led by the Director of Music, Christopher Eastwood.

The Remembrance Concert will be performed by Ealing Abbey Choir & St Benedict’s Concsort Choir, plus orchestra on Saturday 10th November at 7:30pm in Ealing Abbey.

It’s the Friends’ Day and Leavers’ Farewell BBQ Lunch on

Available by email from ealingabbeychoir@gmail.com

Ealing Abbey Choir went on tour to Hungary in April, singing in some of Budapest’s finest churches, and in the Basilica of Ezstergom – Hungary’s largest church.

The tour featured four concerts and a Mass, with music by Tallis, Byrd, Britten, Poulenc, Duruflé and many other composers.

The next concert was given at the Church of St Francis of Assisi in Budapest, before the choristers and lay clerks transferred to Visigrad, and from there to the splendid Esztergom Basilica.

This memorable and successful tour concluded with a concert given at the Church of St Imre in Budapest. The choir enjoyed a week of glorious music, perfect weather, excellent hospitality and the fabulous scenery of the Danube. Director of Ealing Abbey Choir, Christopher Eastwood said: “It has been a privilege to bring beautiful music to the lovely cities of Hungary and to work with such talented musicians.”

Dates for the Diary